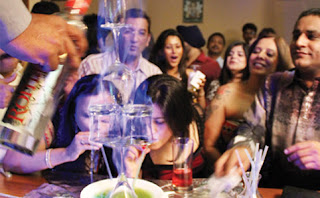 BREAKING NEWS: It turns out that there’s a scientific and logical explanation for why people (mostly men) spend so much time in pubs and only get home in the early hours of the morning. The reason for this odd behavior is based on Einstein’s famous Relativity Theory.
It works like this:  It is a well-known fact that the more you drink, the faster you move. After about 8 beers (or 4 double whisky), you’re moving at speeds closer to the speed of light, and this is where Einstein enters the picture.  According to his Relativity Theory, anybody moving at, or close to the speed of light, undergoes Time Dilation, i.e. time for you in the pub passes slower than for an observer outside the pub. Complicated calculations have shown that the pub becomes a type of time machine: for every half-hour spent inside the pub, something like two hours pass outside the pub.
A typical situation is: “OK guys, it’s 8 o’clock, I’m gonna surprise the family and get home early!!” However, the moment this person steps outside the pub, the time travel effect is negated by negative radiation from the environment, and he/she then goes:” Why is it so quiet?? OMG!!! It’s half past one!! WHAT HAPPENED!!??”
The answer, of course, is Time Dilation!! I’ve tried to explain this to outside observers, but so far nobody (except Fellow time travelers) have been able or willing to understand the sound Scientific basis of this phenomenon. Have you?
Cheers!! 🙂

Neutrogena Fresh Foaming Cleanser Review – a refreshing facial cleanser which is effective at cleansing and removing your makeup.